Posted by Louisa Devadason on 12 November 2020

QCC Volunteers, Sage and Louisa, caught up with West Moreton Landcare member, Bob Hampson. Up until recently, Bob was the president and had been for about ten years – he now serves as treasurer. 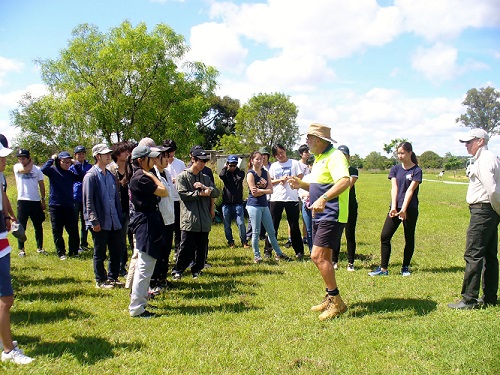 He has been passionate and active in his roles at West Moreton Landcare. An environmentalist who has dedicated over 15 years to waterway protection and improvement. During this time, Bob has developed successful partnerships, coordinated catchment awareness events, and assisted individual landholders and community organisations to implement various projects.

Currently, the group has three big projects going, but the one that has everyone's attention is Lowood Beautification Project & Rail Trail Partnership Program – along the Brisbane Valley Rail Trail. The project began as something local man and West Moreton Landcare member, Peter Bevan, did on his own. It has grown to become something the community has rallied behind and is now supported by a nine-member project partnership including West Moreton Landcare themselves. It's funded through grants.

So far, the project has achieved the removal of highly-flammable long grass, revegetation of native species, an upgrade to drainage infrastructure to prevent land erosion, additional pathway providing access for cyclists and motorised scooters and expansion of local koala habitat. It has also started becoming a tourist attraction and a safe alternative for students walking from the western areas of Lowood to school.

In the video, Bob shares his experiences and his involvement in the project. Key takeaways from his experience as part of a thriving conservation group are: