Posted on THiS IS WHERE TO POST! News and Updates by Queensland Conservation Council · August 31, 2022 11:54 AM

The revealing of this forecast posed a test for the ambition to reduce electricity prices and carbon emissions in the Queensland Government’s upcoming 10 year Energy Plan.

Under the Hydrogen Superpower scenario in AEMO’s ISP, most closely aligned to limiting warming to 1.5 degrees, all Queensland coal will close by 2030, and be replaced by cheaper cleaner renewable energy and storage that makes possible an export green hydrogen industry.

The Energy & Resource Insights report, commissioned by Queensland Conservation Council, Environment Victoria and Friends of the Earth, unveils the timeline embedded in ISP.

While AEMO chooses not to explicitly outline the closure dates in the Integrated System Plan, they are able to be unequivocally calculated using the modelling methodology, and the known nameplate capacity of each coal generating unit.

The report reveals that the lowest cost pathway to a Hydrogen Superpower scenario would involve Callide B Coal Power station closing by 2025, along with Kogan Creek and Tarong, while Stanwell and Gladstone Power stations would close completely by 2028, Callide C power station by 2029 and the privately owned Millmerran power station by 2030. These closure dates are between 3 and 22 years earlier than their official forecast closure dates.

“This report makes it clear that Queensland can run without coal power stations by 2030. It provides a clear standard that the Ministerial Energy plan should be judged against”.

“The agency responsible for operating the National Energy Market has calculated that the lowest cost scenario to transform our electricity generation and transmission to a hydrogen superpower involves coal closure by 2030,” said Dave Copeman, the Director of Queensland Conservation Council.

“If we are to benefit from cheaper, cleaner electricity that will power the industries and jobs of the future, we should be announcing coal power station closures right now, so that they can start in 2025.

“The upcoming 10 year Energy plan should be built on this pathway, to secure a future for our clean industries and a pathway consistent with global warming below 1.5 degrees. Anything slower puts both the Great Barrier Reef and Queenslanders at greater risk of global warming, while keeping electricity prices higher for longer.

“I hope Minister de Brenni is getting the right advice, because Queenslanders can’t afford skyrocketing electricity prices they are paying because of high coal and gas generation prices.

While the energy prices have risen since the release of the 2022 ISP, they did allow for this possibility in the report. “If, for example, recent wholesale electricity prices have been forced higher by higher international fuel prices, domestic coal-plant outages and a lack of transmission capacity, in that order, then investment in low-cost renewable energy and essential transmission is the best strategy to protect against higher prices.

Posted on THiS IS WHERE TO POST! News and Updates by Queensland Conservation Council · August 19, 2022 3:26 PM

Millmerran Power is pursuing EPBC approval to expand its Western Queensland coal mine and prolong the life of its coal power station to 2056, just days after the landmark inclusion of emissions reduction in Australia’s National Energy Objective.

Palmer power station "may not be in the public interest”, says Environment Department

Posted on THiS IS WHERE TO POST! News and Updates by Queensland Conservation Council · August 09, 2022 10:31 AM

Clive Palmer’s controversial plan for a massive new coal-fired power station in central Queensland may face fresh challenges, with the state’s Department of Environment and Science concerned that the project approval "may not be in the public interest”.

Environment Minister Tanya Plibersek has demonstrated her commitment to the environment with today's announcement that she is proposing to reject Clive Palmer's Central Queensland Coal Mine, proposed for the Styx valley between Rockhampton and Mackay.

This report outlines how the proposed Wambo and MacIntyre wind farms had been built by 2021-22, Queensland’s average 2021-22 prices to date could have been reduced by $30/MWh, or nearly 25%, by reducing the number of extreme price points and the reliance on gas during lower demand periods.

Wholesale energy costs are the main driver behind the price rises which will see Queenslanders paying up to  $400 million more for electricity in 2022-23 than in 2021-22.

We can’t get back the past three years of limited progress, but we can get out of the cycle of playing catch up to high prices. 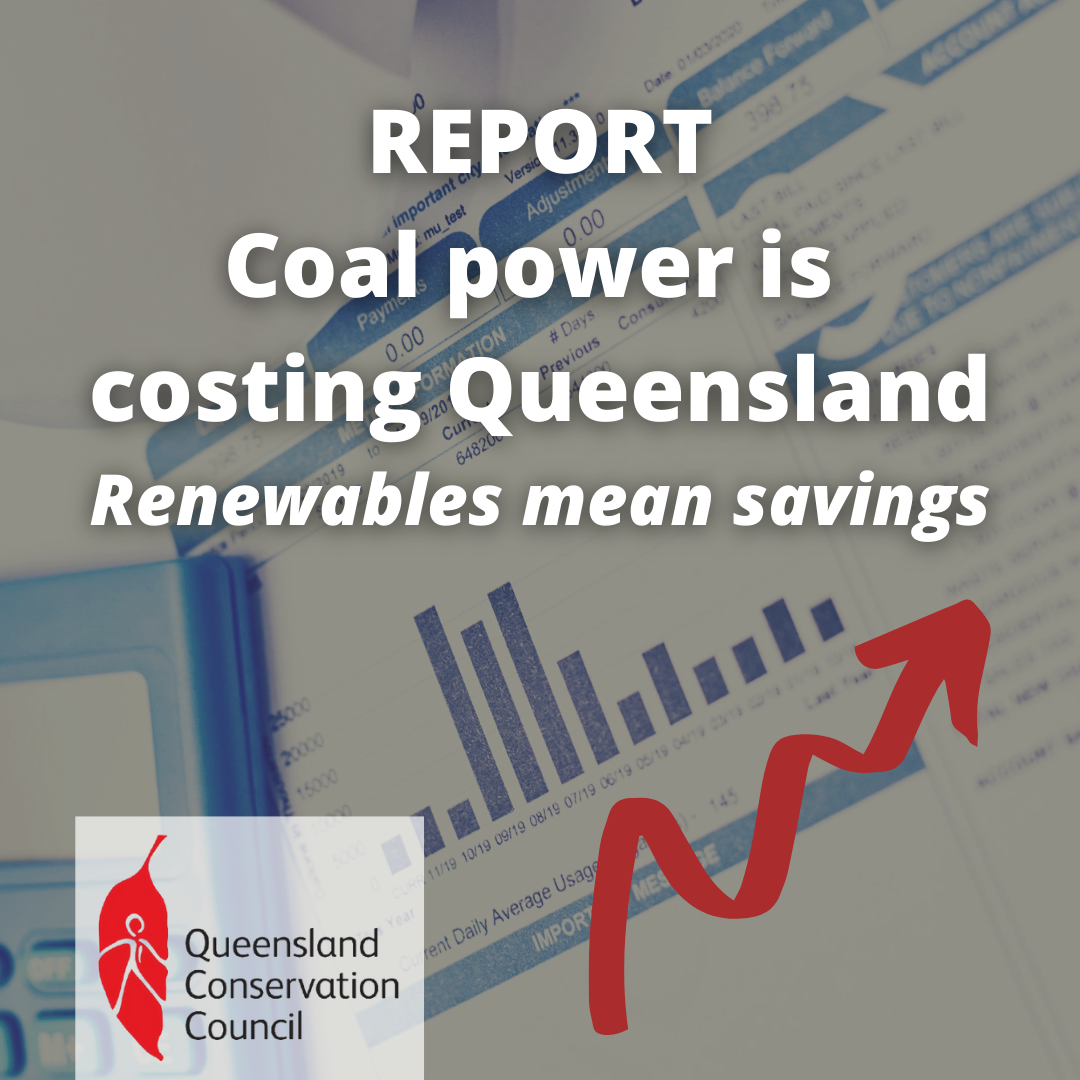 If it goes ahead, electricity from the Galilee Power Station will cost at least $100/MWh. This is likely an underestimate as it would be extremely vulnerable to increased costs from finance, as fewer investors are willing to back risky new coal, and carbon prices over the four decades of its potential operation.

$100/MWh is already 35% higher than 2020-21 prices and is nearly double the cost of electricity from building new renewable energy and storage.

The Galilee Power Station would emit over 230 megatonnes of carbon dioxide and eat up more than 20% of Queensland's carbon budget to meet our Paris Agreement commitments.

Queensland doesn’t need extra energy or capacity from an inflexible, polluting coal fired power station at Alpha. We need investment in clean and cheaper renewable energy and storage for the future.

Based on our analysis, CS Energy would never have made a profit after this year, even before the explosion at Callide C4. After 2023-24, the Queensland Government owned generators of CS Energy and Stanwell will post an operating loss. This means the Queensland taxpayers will be forced to subsidise dirty coal generation to keep the companies alive.

This report sets out the analysis and assumptions made around the cost and revenue streams of CS Energy and Stanwell including wholesale energy sales, retail revenue, forward contracts, coal revenue sharing, power station maintenance and operating costs.

Read the full report below:

Australia is a Colossal Fossil

Australia has received the dubious honour of being awarded the international ‘Climate Fossil Award’ for failing to honour our climate commitments under the Paris Accord.

The Fossil of the Day Award is an initiative of the Climate Action Network International, who base the nominations on "particularly negative, obstructive, or generally unhelpful behavior of government delegations in relation to other Parties and progress on climate talks, the media, and the wider public".