Destruction of forest and bushland driving Qld Koalas to extinction

MEDIA RELEASE: April 5, 2019 – Peak conservation group, the Queensland Conservation Council (QCC), alongside allied conservation and koala groups, is calling on the Palaszczuk government to end the destruction of koala habitat that is driving koalas to extinction. Queensland needs an urgent moratorium on tree clearing in koala habitat across the state to save the species from extinction, an alliance of wildlife carers and conservation groups has said. Statewide, Queensland has lost over 43% of koala numbers and in the Koala Coast east of Brisbane there has been an 80% decline in numbers. It is estimated that the species will go extinct by 2050 unless action is taken to reverse population declines.

“We need an immediate moratorium on development and tree clearing in remaining koala habitat across Queensland. This should remain in place until the government makes the legislative changes needed to protect our remaining koala populations.

“A moratorium like this is not a new concept in Queensland. The state has implemented similar moratoria before under our current vegetation laws, including as recently as 2009.”

The Queensland Koala Expert Panel was established in July 2016 to provide the Queensland Government with recommendations on priority actions to address the relentless decline in koalas in South-East Queensland (SEQ). This Panel released its final report in September 2017.

“The Panel found clear evidence of catastrophic declines in koala populations in the Koala Coast area and an urgent need for policy change to ensure the long-term persistence of the koala,” said Lisa Cliff, Project Officer with Queensland Conservation Council.

“The panel’s recommendations are now one and a half years old, with no urgent interventions having been taken by the government. They need to act quickly on this.” Ms Cliff said.

“Urgent action is needed to protect our koalas. The greatest threat continues to be habitat loss and fragmentation. That is why we are calling for a moratorium to be implemented before longer term protections can be put in place” said Gemma Plesman, Queensland Campaign Manager with The Wilderness Society.

“It’s unbelievable to see that koala habitat is still being bulldozed at huge scales around the state, killing an estimated 1800 koalas a year at last count, mostly outside of the southeast corner. If the government is serious about halting the koalas slide to extinction then they must stop the bulldozing of koala habitat.” said Dr Martin Taylor of WWF.

Springfield Central is one example where the ongoing bulldozing of bushland is leading to less and less habitat for koalas. 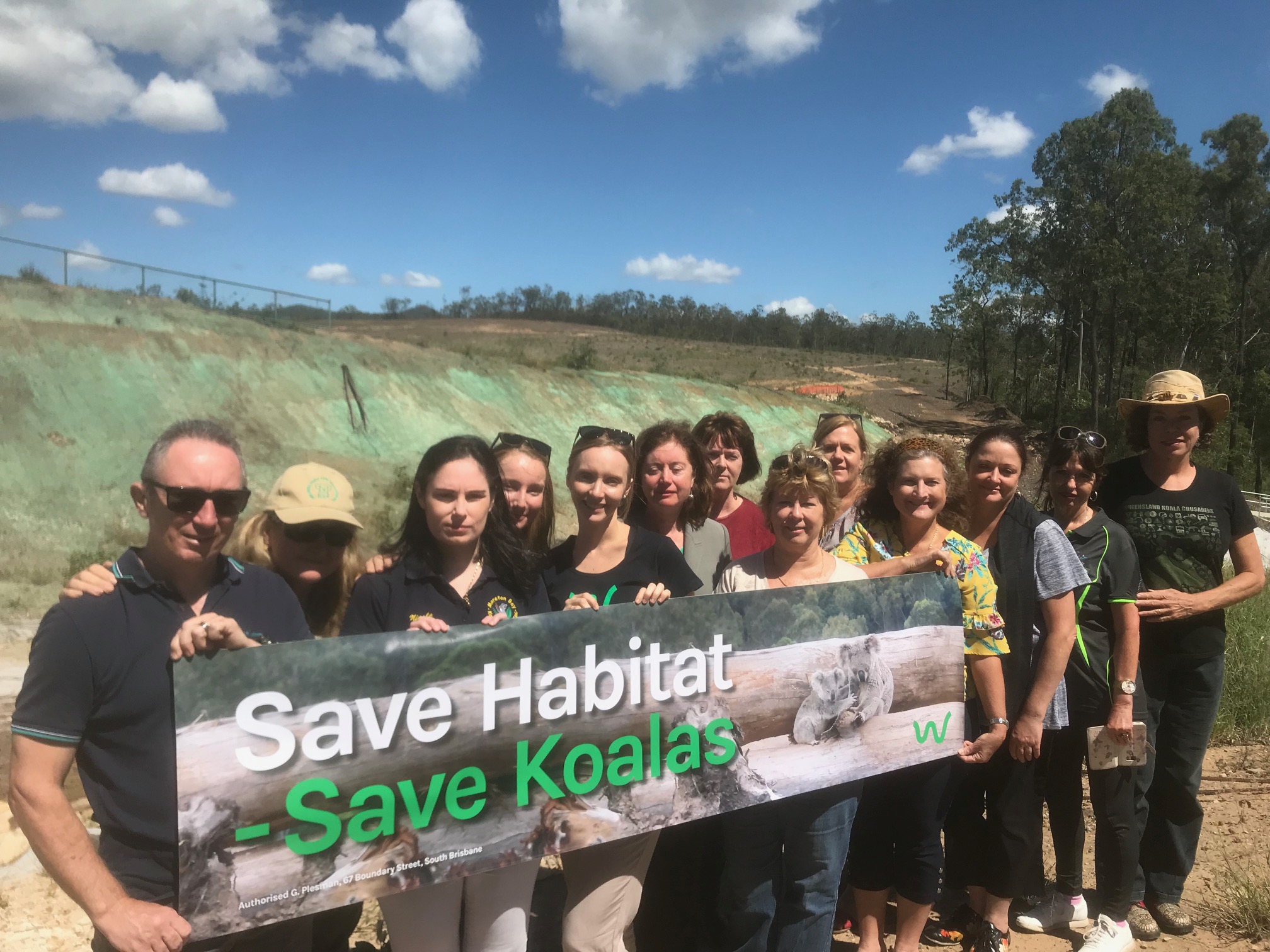 “In the last 4 years we’ve seen hectare after hectare of important bushland bulldozed in our own backyard, it has to end. I’ll never forget the sight of the dead mother koala I found on my morning walk two years ago. This isn’t what we want for our children, it’s not why we moved here.” Said Jim Dodrill, local Ipswich resident.

“Rescuers like me are overwhelmed in Queensland with the numbers of koalas that come into our care every year as a direct or indirect result of habitat loss caused by the bulldozing of native forest.” said Sunshine Coast koala rescuer and advocate, Meghan Halverson

“We have presented the government with a detailed plan that shows it is legally possible to institute a moratorium like this and outlines how it should be implemented,” said EDO Qld CEO Jo-Anne Bragg.

“If the government is serious about saving our iconic koalas from extinction they need to act now. We have shown them how to do that, the ball is now in their court.”