Interview with the Eagleby Community and Wetlands Group

Posted by Isabella Morand on 3 July 2020

Interviewed by QCC volunteer (Laure Claret), Marilyn Goodwin, President of the homeowner's association of Palm Lake Resort, and Chair of the Eagleby Community and Wetlands Group, discusses the campaign which focuses on the Northern Section of the Coomera Connector. The Coomera Connector threatens important wildlife habitat in the Logan region as well as being disruptive for communities. QCC volunteer Louisa Devadason has also written up an article to complement the recorded interview.

As part of the Greater Brisbane Environmental Advocacy Network (G-BEAN), QCC volunteers are working with member groups to highlight the environmental campaigns and issues they are active on. We will be highlighting various groups and the actions they have made towards achieving significant, long-lasting change for the region's conservation and environmental protection efforts. This is the first of what will be many interviews and articles about Greater Brisbane groups.

Launching an Effective Campaign: The Eagleby Community and Wetlands Group 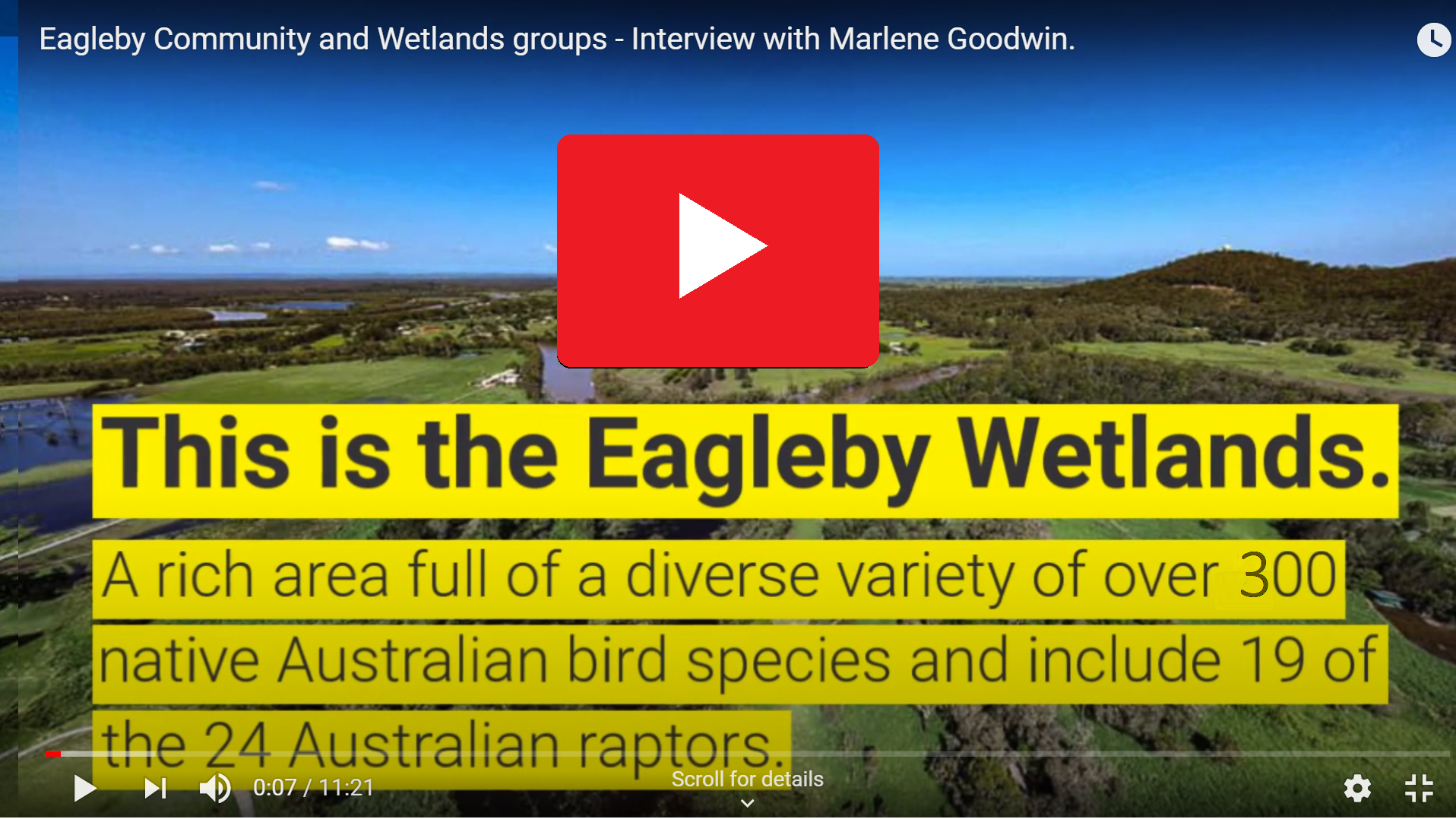 The Eagleby wetlands draw nature-lovers and bird watchers alike. Located on the Albert Area, Eagleby is home to over  300 native Australian bird species, including 19 of the 24 Australian raptors and almost half of the bird species found in Queensland.

The wetlands came under threat last year when the proposed Coomera Connector was designed to cut through this area – devastating community, wildlife, and the environment.

The Eagleby community was outraged at the proposed project. Marilyn Goodwin, President of the homeowner's association of Palm Lake Resort, and who, in July became the Chair of the Eagleby Community and Wetlands Group, shared that the community felt frustrated after a closed-door, invite-only meeting that only included 20 residents. Marilyn shared that the few residents involved in the gathering felt side-lined and patronised. Their attendance merely tolerated so the other stakeholders could check the "community consultation" box. Two days later, the Coomera Connector plans were published in the Queensland Government Gazzette.

According to Marilyn, the local council member at the time called an open community meeting shortly after the closed-door session, and 150 residents participated. They formed the Eagleby Community and Wetlands Group: a group of concerned residents wanting to save ALL of the Eagleby Wetlands. Roles were delegated to subcommittees that focused on the environmental impact, social impact, indigenous research, social media engagement, political engagement, fundraising, and developing an alternative route.

Their goal is to have the plan reassessed as the community asserts the route is expensive, destructive and overall, not practical. The group has developed resources and more cost-effective alternate routes and created an e-petition.

The groups' strength, Marilyn believes, lies in their diversity of representation – different people united in their goal. "We represent all facets of society. We make a powerful image when we go into these things," she said.

Marilyn shared some advice for creating an inexpensive campaign that makes people take notice and listen:

1) Get your facts straight - Gather information, community knowledge; really analyse and understand the situation you are facing.

2) Only speak if you know what you are talking about. - Misspeaking and misinformation make campaigns lose credibility fast.

3) Get to know the people you are working with - Understand what skills and experience group members bring to the table.

4) Research widely - The Eagleby Community and Wetlands group sought information and advice from many readily available websites and other sources.

5) Know your stakeholders - Determine who has a stake in this, who can help, who needs to be involved, who are the influencers, and who can be contacted.

The official Eagleby Community and Wetlands groups' Qld Parliament e-petition 'Removal of gazetted Northern Section of Coomera-Connector Road' has been posted to the Parliament's website.