The video entitled ‘From the heart of Queensland: a True Story’ but seemingly made by a Moree NSW production company, contains footage of farmers and others claiming that land clearing law reform will destroy the agricultural sector and be the end of their livelihoods.

A key section of the video is based on an interview with a Dr Bill Burrows, who is clearly captioned as the ‘Chief Scientist’. The obvious inference that viewers would make is that Dr Burrows is either Queensland’s Chief Scientist, or Australia’s Chief Scientist.

In reality, Dr Burrows was apparently once a scientist for the Queensland Department of Forestry and Fisheries and is a long-term opponent of land clearing regulation.  He also appears to have had associations with the right-wing Property Rights Australia group, and with climate-sceptic and anti-environmental legislation proponent Jennifer Morohasy.

“AgForce and other backers of the video need to come clean and admit that Burrows is not and never has been the Chief Scientist.  They should instead highlight that he is a long-standing opponent of reform, and is anything but independent or impartial.

“It is also regrettable that farmers and anyone else who sees the video are potentially being misled into thinking that sensible land clearing reforms will practically spell the end of farming in Queensland.

“We believe agricultural lobby groups have misled farmers and made them unnecessary fearful of reforms, most of which have been in place before without the farming sky falling in.

“The website connected to the video claims the amended legislation quote ‘Bans all future agricultural development in Queensland’ which is manifestly untrue.

“We have seen periods of both rapidly declining and rapidly rising rates of land clearing in Queensland over the last twenty years, reflecting stronger and then weaker laws.  Over this time, agricultural productivity overall has been pretty stable.

“There is simply no evidence that stronger land clearing laws will impact on agricultural productivity, which is actually affected by commodity prices, exchange rates, droughts and weather events.

“Of course, land clearing has a devastating impact on wildlife and essential habitats, it affects water quality in the Great Barrier Reef, and releases massive volumes of carbon into the atmosphere.

“Droughts and extreme weather events are likely to get much worse under future climate change, and we know land clearing is a contributor. Farmers will suffer if we don’t see serious climate policy action, and stronger clearing laws is something that would benefit them.”

It is understood that the anti-land clearing reform video is made by the same producer and company that was last year forced to remove a charity video from Moree, which depicted ‘blackface’ and racial stereotypes. That video was taken down after Indigenous media and groups complained.

The Queensland Conservation Council stressed that in being critical of the anti-land clearing reform video, it was not attacking any individual farmer. Instead, the criticism is being levelled at the agricultural lobby groups who have whipped up hysteria over the extent and potential impact of the legislative reforms.

The group also highlighted that of the 14,000 submissions received by a Parliamentary Committee recently examining the proposed land clearing reforms, well over 13,000 of them (93%+) were in support of the Bill, with many arguing the reforms didn’t go far enough. 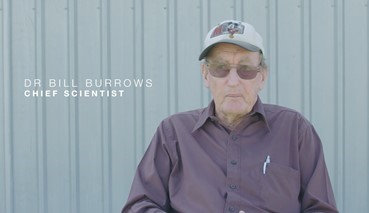 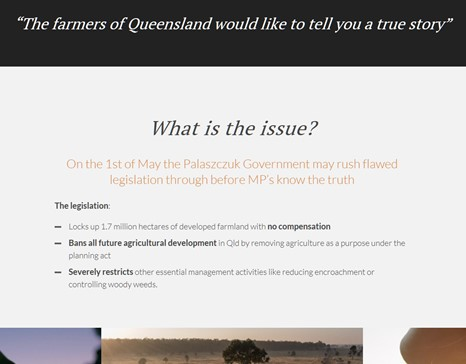